, (GLOBE NEWSWIRE) -- (Nasdaq: CWST), in partnership with officially broke ground on a (RNG) processing facility on at its North Country Environmental Services (NCES) disposal facility in

Project partners and local officials took part in the ceremony, celebrating the official start of the project that is the first of its kind in and which is expected to provide significant environmental benefits as well as dozens of jobs and increased tax revenue for the local economy.

“We’re thrilled to see this vision begin to take shape in Bethlehem,” said and CEO . “We’re grateful to our partners who helped to develop the infrastructure that will lead to opportunity and environmental benefits for the entire state of and look forward to bringing the additional economic benefits to for years to come.”

The facility is designed to capture the landfill gas which is currently being flared and separate it into marketable gases, with primary emphasis on methane and carbon dioxide. Once processed, the RNG will be transported by truck for injection into existing pipeline facilities owned by . The emissions reduction from converting the landfill gas into a transportation fuel is estimated to be 78,000 tons of greenhouse gas emissions annually, which is equivalent to taking more than 15,000 passenger cars off the road.

While acknowledging his family and most especially his grandchildren who attended the ceremony, Rudarpa representative said this project was all about the future, “both in protecting our environment for future generations, and in moving forward together. We look at this as the first of many potential opportunities with Casella and our other partners, and we really want to thank everyone involved in this project for their continued support.”

The construction phase of the project is estimated to take 13 months and is expected to create up to 30 full time jobs. Once operational, up to 12 full and part time jobs are expected to be created to allow the facility to produce at capacity.

A grand opening will be scheduled for the public to tour the facility once it is completed.

ABOUT RUDARPA, INC.
Rudarpa is a Resource Recovery and located in , focusing on Air, Water, Thermal, and Fuel that has assembled a team of experts to develop new projects, address the common issues related to waste recovery in past endeavors, and provide a turn-key solution moving the industry forward.

ABOUT
, headquartered in , provides solid waste management services consisting of collection, transfer, disposal, and recycling services in the northeastern . For further information, investors should contact , chief financial officer at (802) 772-2239, and media should contact , Director of Engagement at (802) 772-2234 or visit the company’s website at www.casella.com.

Such risks and uncertainties include or relate to, among other things, the following: our operations and financial results could impact the landfill gas expected to be generated; adverse weather conditions may negatively impact the Company’s revenues and its operating margin; the Company may be unable to increase volumes at its landfills or improve its route profitability; landfill operations and permit status may be affected by factors outside the Company’s control; the landfill gas processing facility may not work or generate results as expected; and the Company may be required to incur capital expenditures in excess of its estimates. The Company undertakes no obligation to update publicly any forward-looking statements whether as a result of new information, future events or otherwise, except as required by law. 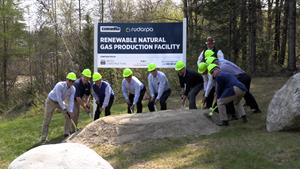 Representatives from Casella, Rudarpa, , , and others officially break ground on a renewable natural gas facility in .